Cardona Lab at the MRC Laboratory of Molecular Biology and at the University of Cambridge, United Kingdom

Please contact Albert Cardona to inquire about the possibility of joining the lab. Helpful tips:

We chose the larval Drosophila CNS as the organism of study for its numerous advantages, in accessibility (reduced dimensions), outstanding genetic tools for manipulating and monitoring specific neurons, and comparatively extremely low research costs. Almost every neuron in the larval CNS is a unique, identified neuron that can be found from animal to animal, affording experimental reproducibility.

The stereotypy and unique identity of most of the 12,000 larval neurons have been and continue to be key to our success in relating circuit structure to function. Genetic driver lines that label a single pair of left-right homologous identified neurons are pivotal in relating circuit structure, as reconstructed from volume electron microscopy, to observations of circuit function and behaviour: the results of experiments done in one animal can be interpreted with little if any ambiguity on the basis of synaptic circuits mapped in another animal.

Furthermore, we are now able to image with volume EM the complete CNS of animals on which we have performed experiments beforehand, and can therefore investigate the effect of the experimental manipulation on the structure of the circuit under study; we call this approach experimental connectomics. See Valdes Aleman et al. 2020.

The Drosophila larval CNS has turned out to be a fabulously well-posed system in which to observe and manipulate the activity and the connectivity of neurons in the context of fully mapped and mappable brain circuits within comparatively very short time frames.

With the extraordinary advances in volume electron microscopy techniques, image processing, machine-learning-based circuit mapping, and transcriptomics, it is now possible to analyse at nanometer scale the brains of small animals. We are now setting up microscopes and methods to sample whole brain connectomes from every branch of the phylogenetic tree, aiming first at small species such as the pygmy squid Idiosepius, the dart frog Ranitomeya, and the dwarf gecko Sphaerodactylus or the small chamaelon Brookesia. But any organism with a brain complete and fully functional yet smaller than about one cubic millimeter is now game for whole brain circuit mapping. 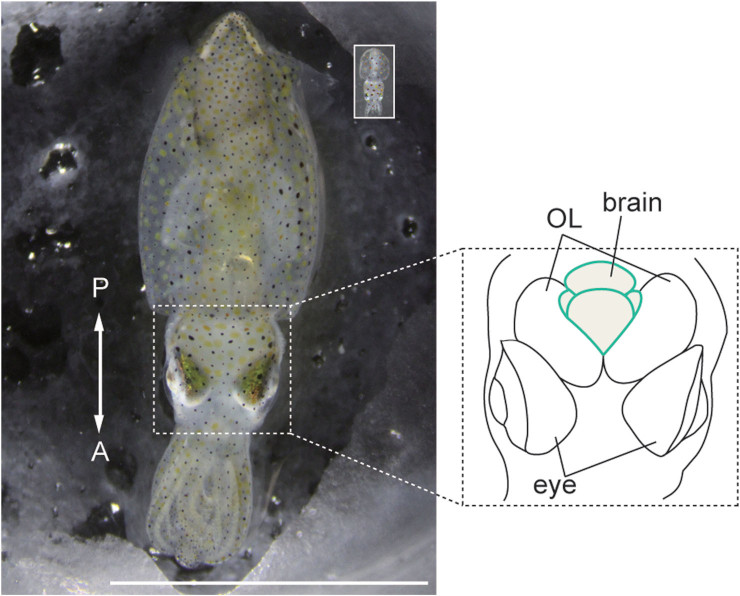 The computational capabilities of a nervous system are a function of its wiring diagram and the properties of its components, the neurons and glia. Inquires into nervous system function rely on sparsely known or assumed connectivity between neurons or brain areas. Existing circuitry maps detail the connections between very small ensembles of neurons, ranging from pairs to hundreds. This, in contrast with the magnitude of the nervous system of even small model organisms like the fruit fly Drosophila or the zebrafish larva, with over 100,000 neurons. Understanding the nervous system requires far larger wiring diagrams than what we have now, ideally of complete organisms for which experimental manipulation and monitoring of known neural circuits in the context of behavior is feasible.

To make headway into the basics of neural circuit function, we propose to focus on small organisms for which (1) the complete wiring diagram can be obtained within a grant funding period; (2) the complete neural activity over time can be imaged with GCaMP in free or fictive behaviors; (3) each neuron can be genetically manipulated independently and reproducibly; (4) the electrical activity of individual neurons can be recorded with electrophysiology; and (5) high-throughput behavioral assays are routine.

Today and in the near future, only in the larva of Drosophila are all five experimental approaches feasible. Techniques developed for the larva may soon scale to the adult Drosophila, opening the possibility of applying the five approaches outlined above to limb-based locomotion and active flight, as well as to complex behaviors like courtship and learning.

Every day: what we do

The reconstruction of the complete CNS of the first instar larva

Starting in December 2012, we are open to proposals from any lab around the world for the reconstruction of their specific area or neuron type of expertise in the Drosophila larval central nervous system (CNS). The ongoing collaborative effort aims at the reconstruction of the complete wiring diagram of the larval CNS. The estimated 10,000 neurons and 3 million synapses will demand the dedication of 50 man-years of work at current rates (we are working towards speeding it up). 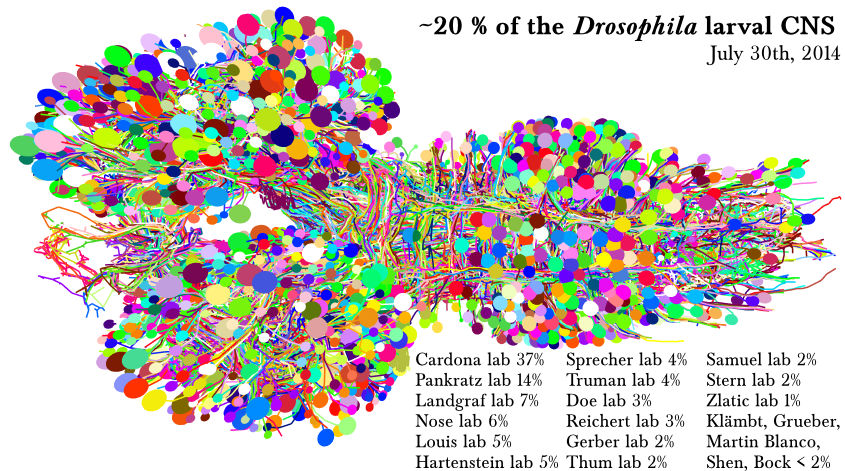 International collaborators are trained in our lab at Janelia during a visit spanning one to several months, and thereafter access the EM volume of the larval CNS and reconstruct its neurons and synapses online via the web browser, using the software CATMAID.

Prior instances of the Lab